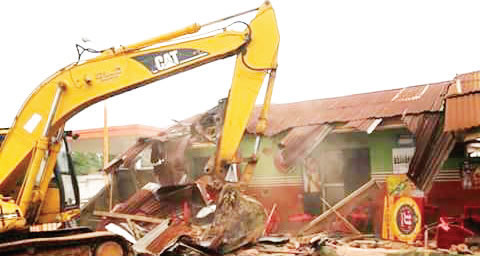 A statement quoted the agency’s general manager, Mr Gbolahan Oki, as saying that the agency’s team disclosed this during routine surveillance and enforcement activities carried out in the Alimosho local government area in Lagos.

Not only did the owner/developer build under the power lines, but the entire structure violated the state’s building codes, Oki, represented by Enforcement and Compliance Director Olusoji Olaopa, said during the oversight event.

“Some of the other violations include: insufficient back-off, airspace, building on fenced walls and being too close to transformers, which pose a threat to occupants and other residents of the area,” he said.

“The agency has duly served all statutory notices, including breaches, stop work orders and demolition notices to the owners in accordance with the Lagos State Building Code, prior to the demolition of the structure.”

In a similar development, the owner of a heavily damaged three-storey structure at 9 Yusuf Bishi Street, Egbe-Idimu, Alimosho, has been officially given an exit/evacuation notice after the building failed non-destructive testing , the structure has been sealed by the agency. , the occupants were evacuated.

Plans have been drawn up to demolish the building.

Seven other illegal and substandard buildings were also seized for various violations, including construction without approval and the absence of a power of attorney.