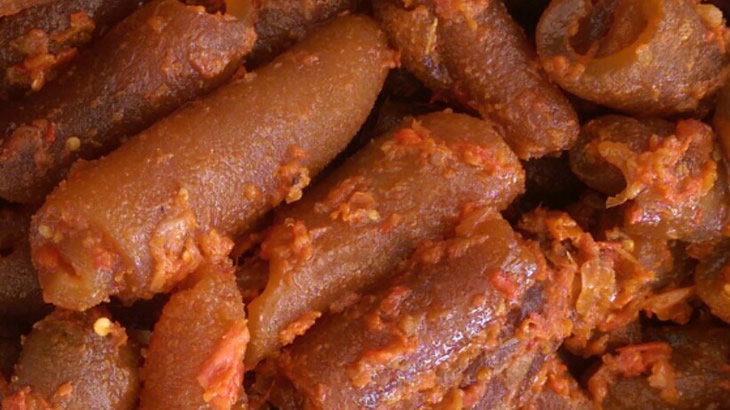 Some Nigerians have kicked against the proposed plan by the Federal Government to ban the consumption of cooked cow skin, popularly known as ponmo.

Recall that the Director General of the Nigerian Institute of Leather and Science Technology, Zaria, Prof. Muhammad Yakubu, recently said the institute and other stakeholders would be approaching the National Assembly and state governments to establish a legislation to ban the consumption of the cow skin.

According to him, the decision is aimed at reviving the moribund tanneries and leather industry in the country.

He said it had no nutritional value and should be proscribed to save the industry and boost the nation’s economy.

However, some consumers, traders and experts who spoke to our correspondent in separate interviews, said banning ponmo would further increase economic hardship on the poor masses.

A consumer, Rukayat Ishola said she was substituting beef and fish with ponmo as a result of the high cost of the protein.

She said, “Personally, I like ponmo. It’s something many of us eat now since meat and fish are costly. It’s also good for elderly people. If you have N200, you will buy ponmo which can serve five people whereas the least you can get is beef that will be N1,000 and it’s just five pieces or less.

“If the government decides to ban it, they want to inflict hunger on the people because the person that does not have money for meat will buy ponmo. I buy in large quantities, fry and keep it for cooking later, and sometimes, my children take it to school.

Another consumer based in Ibadan, Titilayo Oyinlola, also said, “I will advise them not to ban it because a lot of us can’t do without eating it, not only because we enjoy it but because it saves money.

“For example, I came to this market to buy things, my initial plan was to buy N2,000 fish, but when I saw the size of fish they offered me, I had to change my mind. So, I decided to buy two Titus fish at N700 each then and one ponmo at N300, making a total of N1,700. My brother, things are tough and one needs to work with budget.”

A caterer and Chief Executive Officer of Bimras Catering Services, Rasaq Balikis, said when planning for events, it was advisable to mix ponmo with meat or fish in order to save cost.

“It also helps with cost reduction when planning for events because instead of serving two meats, you can serve one ponmo, one meat or fish.

“Assuming you are having a party and you bought a meat of N100,000, if you realise that it’s not enough, you can buy one bag of ponmo which is around 60 pieces to substitute it and it will be okay. So, banning it will affect Nigerians a lot,” she added.

Another caterer, Fatimah Sulaiman, stressed that eating cow skin was mostly required by the elderly people, adding that medical doctors would always recommend it for the elderly people who were at risk of eating beef.

She maintained that such banning would leave such people with no alternative.

On his part, Kabiru Agbon, a cow skin trader, said banning the consumption of ponmo would mean taking away his livelihood.

“Ponmo, as far as I know, is for eating; there is the white one they call bokoto. Why will the government want to ban this now? Don’t you know banning it is an attempt to cause problems and taking away the source of income of many of us? It’s just not possible.”

In the same vein, the Chairman, Butcher and Meat Sellers Association, Bola Ige International Market, Ibadan, Ishola Olalekan, stated that any attempt to ban the consumption of cow skin would not only affect the consumers, but also take away jobs from some Nigerians.

“In olden days, cow skin was mainly used by our fathers for praying mats and some other leather forms. No one ate it before but when civilization set in, people began to process it for consumption. Now that lots of Nigerians are eating it and it has become a daily job for many, banning it will have an effect on a lot of people.

“There are people that depend on the processing and another set in charge of the sales before you now talk about those consuming it. What will they be doing after the ban,” Olalekan queried.

An expert and dietician at Diadem Nutrition and Dietic Consult, Queen Orji, said banning ponmo to revitalise the leather industry is not justifiable, stressing that though it did not contain protein, it served many Nigerians as food.

According to her, the ban of the food item, which is used by people from the eastern and western part of the country, is an attempt to deny the majority of poor people the opportunity of having the cheap cow skin.

“Ponmo is cheap and affordable, and for many, eating it with food is more like they have taken beef. Though it doesn’t add any protein or fat to the consumers, people enjoy it. I’m sure if they ban it, many people will not be happy,” Orji said.

Puerto Rico: A Bad Bunny rant, an ex-governor in handcuffs, and a US territory on the brink RJ News