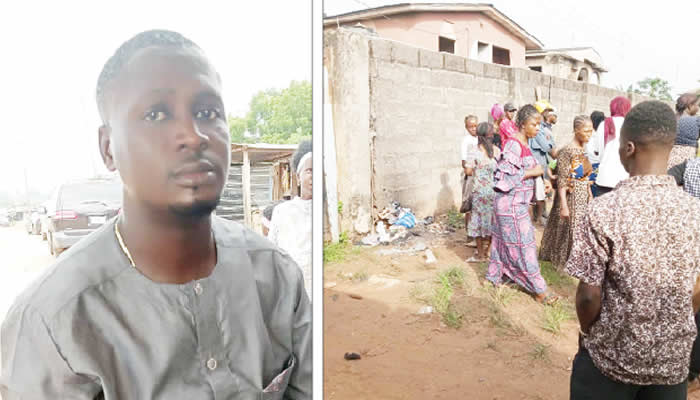 During the latest operation in the early hours of Wednesday, the robbers reportedly killed a motor boy, Olugori Adewale, and injured his neighbour, one Lekan, aka Daddy Praise, on Olufunmilayo Street, Ipamesan, Sango.

PUNCH Metro gathered that the victims, alongside their family members, were sleeping when the hoodlums invaded their residence at midnight.

The gunmen, after scaling the fence of the building, used a rope to tie the security guard.

Adewale’s neighbour, Yetunde Olawore, who spoke to our correspondent after the attack, said the robbers, who were six in number, after pinning down the security guard, attempting luring residents out of their rooms.

She explained that Adewale, upon sighting one of the robbers through the window, raised the alarm.

Olawore said, “I was in my room when I heard Adewale shouting and arguing with one of the robbers. He never knew that they were up to six. He thought it was only one person and was shouting at the person and also screaming for help.

“So, the person went to the window of his kitchen, which had no burglary-proof bars, and gained entry; some other accomplices also entered the apartment from the kitchen and shot him dead.

“One of our neighbours, Lekan, a father of three, who heard Adewale screaming for help before he was shot, also rushed out to assist; but the armed robbers, on sighting him, shot him in the stomach.

“The incident happened around 3am and after the armed robbers left, we tried to rush the victims to a hospital. But as we carried Adewale and stepped out of our building, one of the armed robbers, who was still around, shot in our direction.”

Olawore said they dropped Adewale, who was gasping for breath on the road, and rushed back into their apartments, adding that when they returned, the motor boy had already died.

PUNCH Metro learnt that the victims’ family members, friends and residents in neighbouring buildings had been lamenting the incident.

The deceased’s friend, Joseph Matthew, said Adewale’s wife, Bisola, and child, Basit, who were traumatised by the death of their breadwinner, had been taken to another location.

He said, “Adewale worked as a motor boy with one Olumide Adekunle. It was Adekunle that called to inform me that robbers shot him dead.

“It was when I got there that I realised that the armed robbers also shot his neighbour. The neighbour was rushed to the Hetta Hospital, and no one can say if he is still alive or dead.

“But my friend’s corpse is still at home. Some weeks ago, armed robbers also attacked and killed two people in Oyede community.”

Confirming the second attack, a member of the Agbatan Ipamesan Community Development Association, Sango, who gave his name as Lekan for security reasons, said the constant attacks had been creating tension in the community.

He said, “Three weeks ago, we experienced a robbery attack in Oyede community and they killed a couple. In the early hours of Wednesday, armed robbers stormed Olufunmilayo Street in Ipamesan community, shot one person dead and the other person was shot in the belly and has been in the intensive care unit of a hospital.”

He said, “They (suspects) attacked the place and shot the man. But according to the information the policemen got, the man struggled with them and that was why he was shot. The man was taken to a hospital but unfortunately, we lost him.

“The Commissioner of Police has directed that the State Criminal Investigation Department should take over the case. I believe that we are going to get the suspects. I am not aware of the other attack but I will find out.”